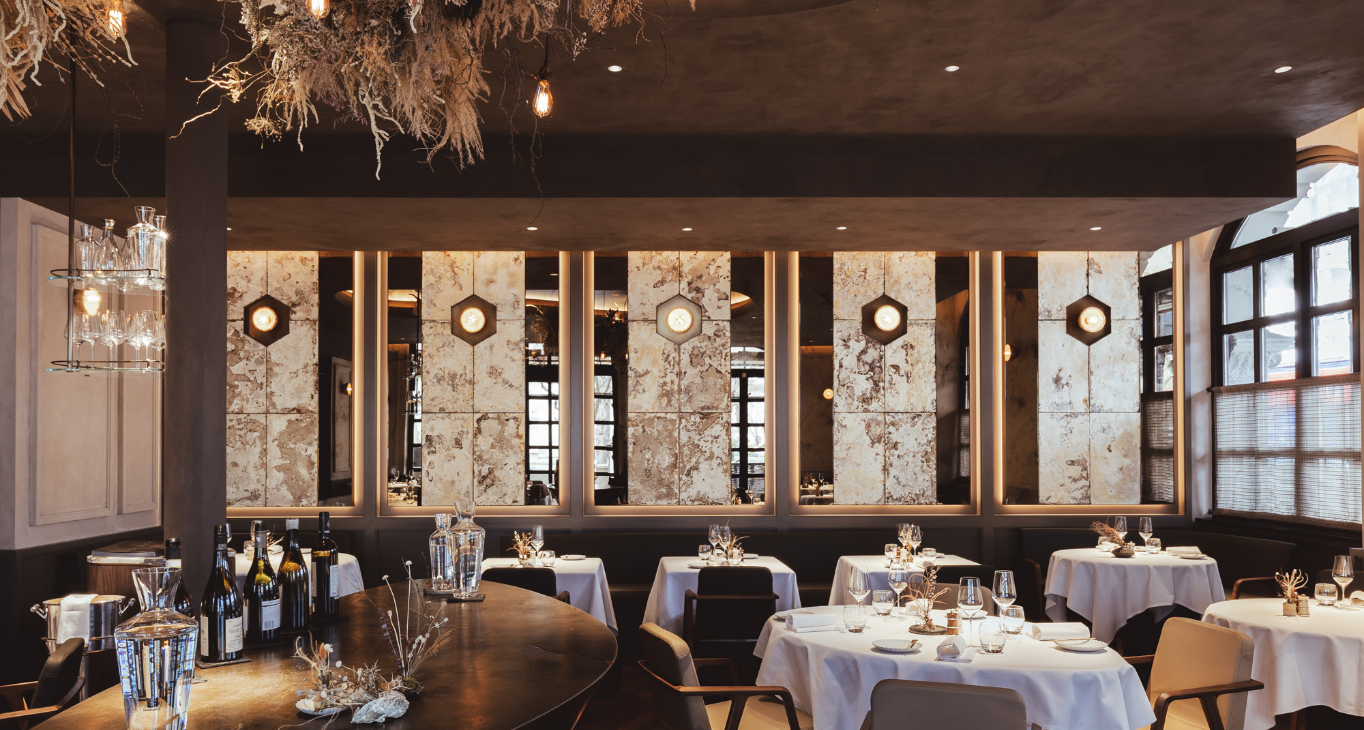 The Ledbury has quietly reopened its doors after a two-year hiatus. Given the lack of fanfare and fuss, you might think not much has changed at the Notting Hill landmark, rated among the top 50 restaurants in the world. Until you step inside, that is.

The hallmarks of the fine-dining destination remain – from the crisp white tablecloths to the polished decorative finishes – but these are now set against a striking new backdrop, installed under the watchful eye of Rose Murray and her interior design studio These White Walls. “The Ledbury is an institution; it’s been going for 15 years,” says Rose. “But there was a feeling that the space didn’t represent the ethos of the team behind it – or the daring new direction of the menu.”

Certainly, with raw, organic ingredients elevated to art-like status on the plate, chef-owner Brett Graham wanted a setting to match, meaning the food became a starting point for the redesign. “I was interested in the experience of putting together the menu; it’s very much a conversation between the formality and restraint of fine dining, with these rogue, wild elements that come in with the ingredients,” muses Rose. “Brett is all about provenance: his food is earthy, so I wanted to see how I could reference that in the design.”

Her answer, it transpired, was to “delicately disrupt” the rigidity of the box-shaped dining room with sculptural forms and unexpected materials, without compromising practicality. “There has to be an integrity to the design that reflects the values of the place and the person behind it, but equally it has to function,” Rose continues. “Originally the tables were quite loose, and it felt like there was little sense of intimacy, so we added big corner benches to enable people to feel like they’re anchored into the space rather than floating around.”

From the vantage point of these well-appointed benches, there’s plenty to admire. There’s a statement coffered ceiling filled with dried flowers by Phohm floral design studio. Joinery is hand scalloped and tactile, the craftsmanship of its makers immediately apparent. Meanwhile, panelling is coated with unpredictable lime paint to give an almost suede-like patina that creates an interplay between the unexpected and the formal.

Taking centre stage is a striking feature wall clad with tiles of Mycelium, a fungus-like material that’s more commonly used in construction. “Traditionally people might see Mycelium as an ugly, spongy material, something that should be hidden, but it has this beautiful, fluid colour; it’s almost soft and velvety,” says Rose. The inspiration for this unconventional decor decision came once again from the menu. “Brett loves mushrooms,” she shrugs with a smile. “That’s something that really stood out to me – his love of earthiness.”

In a nod to Rose’s multidisciplinary career as a scenographer and stylist (she previously worked on set dressing and pop-up banquets for the likes of Ottolenghi and Mark Hix), there’s a performative aspect to the redesign, too. This manifests itself in a theatrical serving table, which also functions as a standalone work of art, cast in bronze resin by the British company Based Upon.

“My background has definitely had an impact on the way I approach interior design,” Rose agrees. “It’s very narrative-driven and filmic. I think about the full set and then zoom in on the accents. For me, when you dress a set, every object must be relevant otherwise it just stands out or it won’t make sense to the story – and I bring that through to interiors, which is why I’m detail-obsessed.”

She refers to her design ethos as “blank canvas creativity”. This, she explains, means not coming to a project with a pre-existing template or aesthetic. “I like to allow a design to emerge from a feeling. Clients come to me because they want a change, they want some form of growth and it’s up to me to decipher what that is and what it looks like.”

The three pillars of “narrative, space and artistry” underpin Rose’s work, with a sense of location also a key part of the storytelling. “Context is important, whether you choose to celebrate and reject it. I always have the crowd in mind when I design,” she reflects. “With The Ledbury it was important not to alienate that community. I wanted to create a space where people who’ve been going there with their grandparents come back and go: ‘Wow, it’s great. It’s like The Ledbury, but better’.”

The fact that the restaurant had to close its doors because of the pandemic makes the reopening, however understated, feel all the more symbolic, says Rose in parting. “It feels like The Ledbury has come back up again – this time with polished armour.”