An exclusive neighbourhood of Georgian architecture and home to countless luxury apartments, Mayfair is a haven for the city’s most perceptive residents.

Making a statement of its regal history, the streets of Mayfair are lined with Bentleys and traditional pattern-book brick Victorian houses. A borough teeming with cultural heritage, you certainly won’t be short of things to do near Mayfair. Named after an annual springtime festival that was a far cry from its current status, it was acquired in the 18th-century by The Grosvenor family and transformed into an aristocratic playground. Now, most Mayfair apartments in London are located near a mosaic of opulent shops, restaurants and galleries with interiors as elegantly designed as their facades. Pick from the capital’s finest cultural institutions or find a spot to unwind with three Royal Parks only a stone’s throw away. Whatever your idea of the perfect day is, staying in apartments in Mayfair keep you within the charm of its intimately pastoral atmosphere while remaining above the humdrum. Michelin-star restaurants in Mayfair set a new standard for gastronomy. Tempting menus with indulgent interiors invite you in, the five-star service makes you stay. An energizing breakfast, a healthy lunch, an indulgent dinner — choosing where to eat in Mayfair may prove a challenge. Queens of Mayfair works wonders with seasonal ingredients. Alternatively, try brunch at Kitty Fisher's or simply grab a coffee at the Park Room. Afternoon tea in Mayfair is usually a sophisticated affair – Claridge's is no exception. In the famous art deco Foyer & Reading Room, expect tea selected by an in-house connoisseur and a classical pianist.

Equally as sumptuous, private dining in Mayfair is designed to impress. Rural Irish cuisine makes its debut at Corrigan's while classic British fare takes centre stage at Ormer. Fine dining in Mayfair doesn’t get much better than Le Gavroche, which serves haute French cuisine that has won Chef Michel Roux Jr two Michelin stars. The wine bars in Mayfair serve quality drinks– try Frescobaldi, whose selection of wine is as revered as its gastronomy. Aside from the quintessentially British architecture, the designer – and well-designed —boutiques and the tapestry of culinary delights, what are the sights and attractions in Mayfair? Our answer: its thriving art scene. Contemporary art enthusiasts will feel right at home at the renowned Hauser and Wirth Gallery whose identity has shaped the creative industry. If you’ve got time on your hands, drop by the David Zwirner Gallery, which stretches across three floors of an 18th-century Georgian townhouse. The new Saatchi Yates gallery, opened by Charles Saatchi’s daughter Phoebe Saatchi Yates alongside her husband Arthur Yates, occupies a considerable 10,000sq ft across two floors and supports emerging international artists.
Perhaps, distracted by Mayfair’s retail splendour, you’re craving a speedy creative fix before that unmissable booking at one of the best restaurants in Mayfair. Opt for 54 the Gallery, the Goodman Gallery or the Halcyon Gallery for a quick tour of contemporary oeuvres by up-and-coming international artists. Shopping in Mayfair, London is a bespoke experience. Luxury boutiques favour timeless haute couture over fleeting trends and you can always expect a deluxe standard of service. A checklist of things to do in Mayfair is incomplete without paying a visit to legendary Savile’s Row, a street lined with venerable tailors, many of whom have been established since the 19th century. Dege & Skinner, Davies & Son and Gieves and Hawkes have all dressed Kings, Princes and Presidents but if you need a feminine twist, try the Huntsman, which was frequented by Queen Victoria. Maison Margiela's flagship on Bruton street, reimagined by Dutch architects Studio Anne Holtrop introduces simple and tactile aesthetics to Mayfair shops. While you’re there, drop by Nanushka Sandra Sandor's first London-based store. Collaborating with Festen Architecture on the store’s aesthetics, it includes an indoor garden, café and lounge-inspired rooms. Similarly, Eskandar's fashion line is all about engaging with touch and comfort. Drawing on his Persian lineage and love for artisanal crafts, Eskandar’s garments are rich in detail and design. 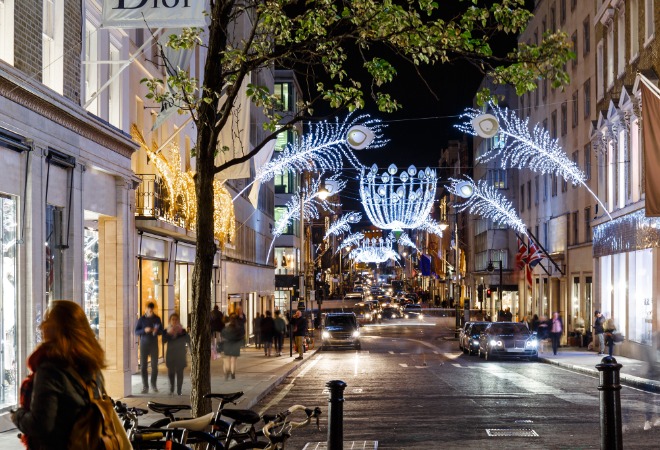 You’ve spent the day discovering the marvels of the borough and now you need a place to catch your breath. You’re wondering, what are the best parks near Mayfair? Hyde Park takes the trophy. Smell the roses in Hyde Park, a 250-acre green oasis, bound on one side by the Serpentine lake. Cross the lake and find yourself in well-kempt Kensington Gardens which encircles Kensington Palace. Tidy flower beds and Italian water features are must-see. To the south, 350-year-old Green Park links St James's Park to Hyde Park. St James’s Park surrounds Buckingham Palace, St James's Palace and Westminster. Enjoy some casual aperitifs with friends, go for a run around the lake or follow the Diana Princess of Wales Memorial Walk, charted by sculptural plaques. If you’ve already checked out Downing Street and the Horse Guards Parade, venture a little further north to the end of The Mall where Grade I listed architectural landmark, Admiralty Arch, leads through to Trafalgar Square. If you’re on a quest for a change of scenery, you can be sure that one of the best things to see and do in Mayfair is to visit these local landscapes.

Stay in fabulous homes, stay a part of our golden community, stay in the know about one of London's most premier neighbourhoods. Stay with us.